The Story of a Rover

Students from the Global Academy of Technology, Bangalore, participated in the Intel-powered Program and succeeded in creating a Gesture Control Rover. Students Srinidhi S, Sanjay Gowda S, and Sanjay M Patil, motivated by the session and the needs of future exploration vehicles such as a flexible control mechanism, and self-awareness, developed a Gesture Control Rover.

Organized in association with FICE, the Intel program was able to train about 75 students in a single session. One of the outcomes was the creation of a robot, controlled by a wearable glove by students, monitored easily using a VR setup.

Ms. Akhila, student, 7th-semester GAT conducted the training and gave an introduction to the Intel-powered program and delivered a brief about different applications that could be built using the Intel Program.

Ms. Akhila delivering the brief and introduction to the Intel program

The team members Srinidhi and Sanjay Gowda are from Electronics and Communications branch, Sanjay M Patil is from the Mechanical Branch. The joint effort by the students from both the streams and their shared knowledge in their respective streams helped to create the product, and in the process, helped them learn/explore many new things as well. All three members of the team contributed and participated with great zeal right from the beginning. 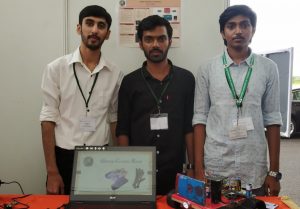 Details of the Rover Creation

The rover can protect itself from any obstacle within its safe distance, used on multiple terrains due to its tank threads. This RF controlled rover can detect light intensity to illuminate its surroundings for continuous observation.

Gesture control Rover has some of the add-on essential navigation and safety features such as Virtual Reality, Anti-collision, and Smart Lighting. These additions to the previously inherited attributes have made the robot smart and efficient in small-scale observation and exploration rover. These additions have also increased its chances of survival by giving early warnings if any obstacles are detected in the blind spot of the user and also provide an easy user interface for better control of the rover.

Technology Implementation in the industry

The scope of application of such a technology is immense. They can be used by physically challenged people to navigate their robots around space. MARS Exploration Rovers used by NASA has a similar technology implementation that helps scientists get up-close and personal with Martian rocks and soil.

Get connected with our team to know more about the classes offered by FICE. To enquire about FICE Intel® Intelligent Systems Labs for Artificial Intelligence, High-Performance Computing, and Internet of Things, please contact Mr. Pradeep G, Director – Business Development (pradeep@fice.in).

Gesture Control RoverIntelIntelligent Systems Labs
Prev PostTOP 5 – CAREER PATHS FOR YOU IN 2020
Next PostHow to smarten your Agriculture System?!